Back in 2011, Denver policy maker Douglas Bruce, a man who spent two decades as a taxpayer advocate, faced a trail that left him with a six month jail term for a myriad of charges, including tax evasion, filing a false tax return, attempting to influence a public servant, and failure to file a return or pay taxes. Recently a three-judge panel with the Colorado Court of Appeals upheld those convictions, declining Bruce’s request to overturn his past conviction. 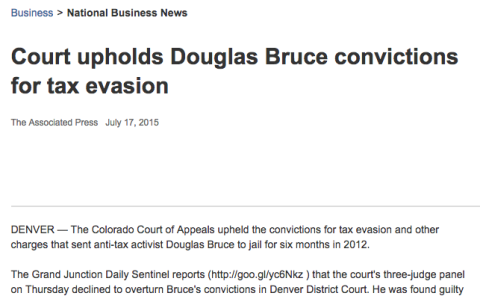 Bruce, before his conviction, was best known for authoring the voter-approved Colorado’s Taxpayer’s Bill or Rights which limits how much tax revenue the government can keep, and requires voter-approval for taxes. During the 2011 proceedings, just before he was convicted of the aforementioned crimes, Bruce was quoted as saying “This was the dirtiest trial I have seen in 38 years, regardless of the outcome.”

Whether or not his statements are true should be left up to interpretation, but the one thing that is for certain, is that messing around with the tax-paying process never turns out well for those that mess with it. It’s been proven over and over again, whether you’re a famous pop-star with millions hidden in a safe or a stay at home mom who didn’t file taxes for those extra babysitting jobs, the IRS will eventually get to you.

If you have found yourself in the unfortunate situation of owing the IRS back-taxes, the best thing to do is engage with them as soon as possible. Staying in communication with them will let them know that you’re not trying to hide anything. And if you have been hiding anything, it’s still a good idea get it out on the table.

Hiring a Denver tax attorney or Denver tax lawyer is a great way to show the IRS that you want to get your account in good standing. A tax attorney in Denver can help you by contacting the IRS and can possibly establish a payment plan that works for all of the parties involved. The tax attorneys at companies like Tax Tiger are well educated on all of the changing tax codes and rules and will help you navigate the process with ease.